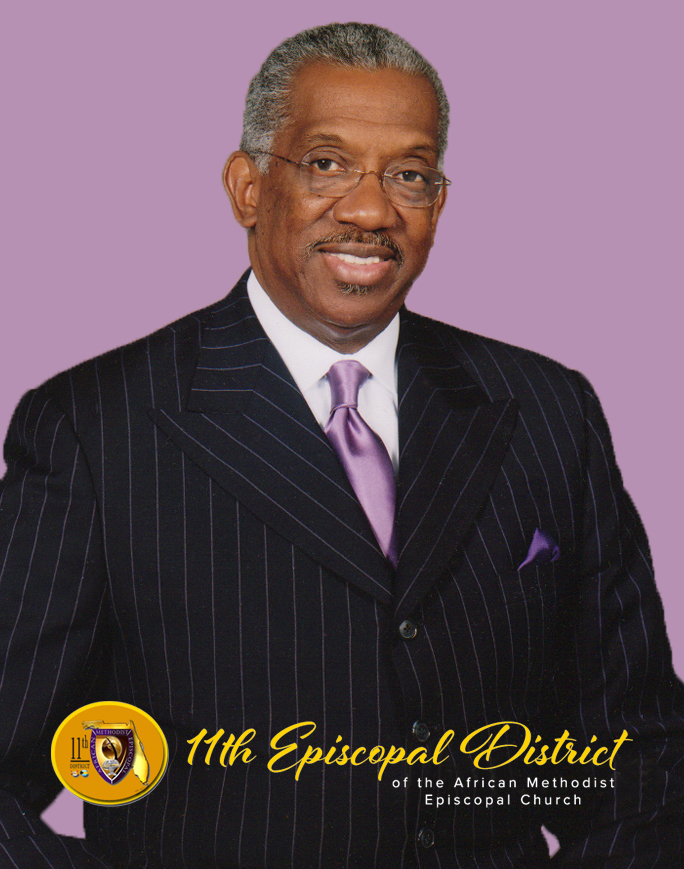 Adam Jefferson Richardson, Jr. was elected and consecrated the 115th Bishop in the African Methodist Episcopal Church in 1996 at Louisville, Kentucky. He was assigned to the 14th Episcopal District which includes six countries in West Africa.

In the 2000 – 2004 quadrennial, he served as chair of the Lay Commission and as a member of the World Methodist Council. He has chaired the Health Commission and twice as chair of the Commission on Seminaries, Universities, Colleges, and Schools. In 2002, Bishop Richardson served as President of the Council of Bishops and the Presiding Bishop of the 19th Episcopal District with headquarters in Johannesburg, South Africa. Beginning in 2004, he served as the presiding bishop of the Second Episcopal District which includes North Carolina, Virginia, Maryland, and Washington, DC. For eight years, the Second District saw phenomenal growth in membership, educational support, missions-related ministries, and ministry to men, health, prisons, the advancement of women in ministry, and a commitment to social and political action.

Bishop and Mrs. Richardson took great pride in the District’s embrace of ministries to youths and young adults. At the 2012 General Conference, Bishop Richardson was elected president of the General Board and was assigned to the Electrifying, Empowering Eleventh Episcopal District which includes Florida and the Commonwealth of the Bahamas. Prior to his election as a Bishop, he was senior minister of the Bethel A. M. E. Church, Tallahassee, Florida. For eighteen years his leadership and teaching skills produced a major ministry of growth in membership, new and expanded facilities, outreach to the poor and dispossessed, with an active presence in the community. Bishop Richardson began his educational pursuit in the public schools of Tampa, Florida. He received the B.A. degree from the Florida A&M University (where he was noted as the head drum major of the famed Marching ‘100’ Band). He received the Master of Divinity degree from the Turner Theological Seminary at the Interdenominational Theological Center (ITC) in Atlanta and the Doctor of Sacred Theology degree at the ITC through the Atlanta Theological Association.

His ministry has included teaching at the Interdenominational Theological Center and Morris Brown College in Atlanta, and an adjunct instructor at his alma mater, Florida A&M University. He has received recognition from the City of Tallahassee, the State of Florida and the many places he has taken his message of hope and encouragement. In 1994, he was cited by Tallahassee Magazine as one of the most influential people of that city in the past fifteen years. Bishop Richardson has contributed articles or chapters in several books, including: “The Great High Priest” in the African American Devotional Bible, 1997 (Congress of National Black Churches); “Courage to Face the Battles of Life” in Ain’t That Good News, 1984 (the Rev. Gregory G. M. Ingram, ed.); “An Introduction to the New Testament” and “Pastoral Care” in The Pastor’s Manual of the AME Church, 1976 and 2000 (Dr. George L. Champion, ed.); and has written several instructional manuals for discipleship training and spiritual formation for churches he has served and for use on the lecture circuit, which include Take Me To The Water: A Manual For Christian Baptism, 1996; African Methodism 101, 1996; Traditional and Charismatic Styles of Ministry, 1996; The Wedding Manual, 1994; The Funeral Manual, 1995; and Headlines to Homilies: Sermons on Political, Commercial and Other Popular Annoyances, 2000.

His most recent publication is “Let the Church say Amen: Liturgy, Litany, and Homily,” published in 2012. His travels outside of the United States have taken him to 30 countries, commonwealths and nation states. He and his wife of 47 years, Dr. Connie Speights, are the proud parents of two adult children, Monique (an attorney), and Trey (a certified radiographer and recipient of two Master’s degrees in music theory and classical saxophone).

General Information What Is The General Conference?

Adam Jefferson Richardson, Jr. was elected and consecrated the 115th Bishop in the African Methodist Episcopal Church in 1996 at Louisville, Kentucky. He was assigned to the 14th Episcopal District which includes six countries in West Africa. In the 2000 – 2004 quadrennial, he served as chair of the Lay Commission and as a member of the World Methodist Council.